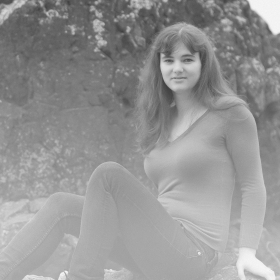 After reading all of the non-adult books in her small-town library, Emily Garland decided that if she still wanted to read, she would just have to write books. "I used all my spare time to write instead of doing all those normal school kid activities like making friends and participating in water balloon fights in the middle of winter," she says.

A practical child, she realized that writing isn't the highest-paying profession. "I tried to become interested in anything else: welding, engineering, science, business, plumbing, small engine repair, but alas, I do not have the mind - or hand - for anything that has the faintest hope of keeping me above the poverty line." When she was accepted into the literary arts program at the University of Victoria, she decided it was a sign to follow her dream, "whether that meant a diet of hotdogs and Ichiban noodles or not."

Being awarded a Premier's Centennial Arts Scholarship helped support her literary training by giving her more time to focus on her writing instead of on part-time jobs. It also had an unexpected influence on her writing itself. "One of my professors, Tim Lilburn, a Saskatchewan poet, found that I had won the scholarship and pushed me to write from a Saskatchewan perspective in my work," she says. "So, the scholarship helped me open a side of myself I'd never considered writing before, and at the present time, is what I'm shaping into a manuscript."

Garland has been accepted into an online master's degree at the University of British Columbia in fall 2011, focusing on children's literature and poetry.